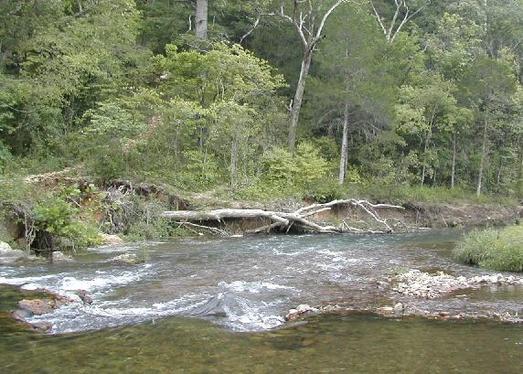 The White Ribbon section of the Current River includes all water downstream from the Cedar Grove bridge. This stretch of water can be quite productive, with many more rainbows than browns. In fact, this White Ribbon area is one reason why the river as a whole is such a solid trout stream. During migratory seasons, the blue ribbon area trout move toward the park, and the white ribbon area trout move toward the blue ribbon section. This would naturally leave the lower stretches empty of trout, but their number are replenished by periodic stocking every few weeks. When The migration is over and the fish drift back downstream, the downstream populations swell, and the upstream populations are replenished with daily stockings in Montauk, as well as the annual brown trout stocking in the blue ribbon section. In other words, fishermen can fish any section of the river and generally find fish. Perhaps we can convince MDC to add a white ribbon section downstream from all of the states red & blue ribbons waters (???).

There are only three riverside access points in this portion of the river -- Cedar Grove, Welch Spring and Akers Ferry -- and since much of this stretch is not completely wadable, you will need to float it to fish it completely. If you don't have access to a canoe or raft, the Welch Spring Access boasts consistent fishing results downstream from the Spring for quite a long distance.

Bait fishermen will see success drifting worms and salmon eggs under a bobber while wading to cover more water, and spin fisherman always do fine here with most anything. Fly fishermen will find a healthy and diverse aquatic insect population in this section, so traditional western-style flies work well. The last time I did an insect sampling in this area, I found mayflies, caddis and yellow stoneflies (sizes 12-18), black stoneflies (size 10-12), hellgramites (size 10), and scud (12-14).

The primary challenge for fishermen will be dodging canoes throughout the summer. As is the case with all popular float rivers, you can avoid most of the canoe traffic by fishing the lowest reaches of trout waters early in the day when the floaters are still upstream. When the water begins to get crowded with boats, load back into the car and head upstream to fish the upper stretches. 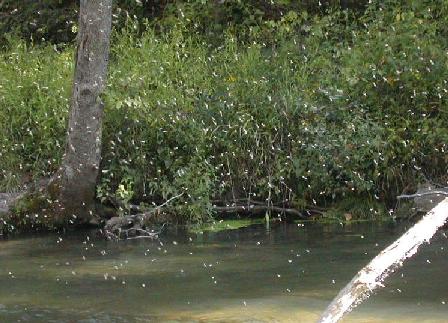 The Blue Ribbon Section of the Current River holds a very nice brown trout population, as well as plenty of rainbows, a few of which are stream-bred. This portion of the river also gives you a real good chance to catch a 20+ inch fish. There are five primary access points from which you can wade into some great fishing. You can enter from Montauk State Park by entering the campground area and parking at the furthest lot, closest to where the river leaves the park. There are well-used trails that will lead you on foot, and a prominent wooden sign is posted at the river's edge to show where the park ends and the blue ribbon area begins. There are some great pools and a few sets of riffles just below the park that routinely give up quality fish.

The second access point is at Tan Vat. Exit the park out the back door and you'll find yourself on a narrow dirt road. The Tan Vat access will be on your right, but be careful you don't mistake a drainage creek with the dirt road you're actually looking for. Upstream from Tan Vat you'll find some good holes that often give up big fish, especially to spin fishermen casting mini-crankbaits and marabou jigs. Immediately downstream there is a stretch that works well for lures or flies. Below the riffles 100 yards downstream, however, the river quickly turns into a textbook trout stream, with plenty of riffles alternating with pools and only the occasional silty run. 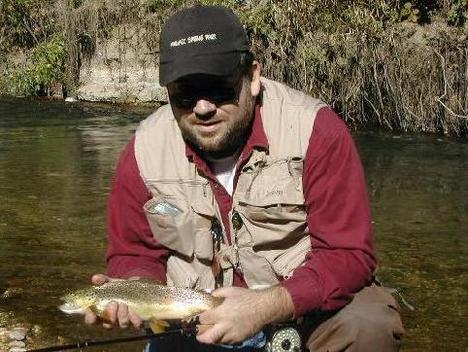 #22 adams midge during trico hatch
By following the county roads, you'll find Baptist Camp Access, Parker Access, and Cedar Grove Access further downstream. In some spots, you may have to wade a while to find some water that holds good fish, but when you find a good set of riffles or a deep pool, you'll generally also find a good number of fish. With rivers such as this, you may think it would be fun to commit yourself to a hard-core day trip, starting before dawn at one access point and hiking and fishing upstream to the next before nightfall. However, there are portions of this river are too deep to wade and have impassable banks that butt against bluffs on one side and are overgrown with serious brush on the other. So, I'd suggest you float a stretch before you decide to hike it. If you don't take that advice, at least plan for a possible extended stay (i.e. matches, flashlight, dinner, etc.). At the very least, touch base with a ranger to let him know your plans before you strike out.

Now, there is one notable oddity about this portion of the river. There does not appear to be any dominant aquatic insect food source that the trout tend to rely on. If you seine the stream, you'll find a few caddis, the occasional little stone, and a good teeny mayfly population, but that's about it. This is likely the reason that purist fly fishermen have been known to struggle here. They come equipped with traditional Western fly patterns and are often blown away when they see people outfishing them on orange glo-bugs and white mini-jigs. The trout here have been known to hit well on such flies as Zug Bugs, Mohair Leeches, and other attractor patterns. You can often bring a trout up to the surface to grab a variety of dries, including Elk Hair Caddis and generic mayfly imitations. Prince Nymphs and Copper Johns are also productive at times. In August and September, there are massive Trico hatches which can occur daily, but, often, you'll fish Trico dries, spinners and emergers right through the best part of the hatch without getting a single hit and without so much as seeing a single trout rise. Now, there are other times with the fish will hit readily on Trico patterns, tiny Adams, Griffith's Gnats, etc. during the hatch, so be sure to stock these flies as well, just in case. Bottom line is this: without that dominant food item to key in on, these trout have learned to feed opportunistically. That means that they'll often hit almost anything that is noticeable and looks like it might be food. So, while you can match the hatch with a #22 zebra midge, I just might outfish you with big yellow glo-bug.

As is the case in all streams with limited aquatic insect populations, be sure to bring your terrestrial patterns -- ants, hoppers and such -- for summertime fishing. Big streamers will often work well in the deeper holes below good riffles, especially early in the season. And spin fishermen have been known to tear them up on jigs and itty bitty crankbaits, as mentioned earlier. But, above all else, if you want to catch fish here, you absolutely must not forget to bring glo-bugs and y2k bugs. When nothing else is working, glo-bugs will work and will often work extremely well -- even on big bruiser resident fish. It may be hard for the purist fly fisherman to accept, but if you want to catch fish here, you may have to resign yourself to using what works.  ​

The Current River is southwest of Salem flows out of Montauk State Park.