Tracking Down The Fish
​

I know they're here somewhere. 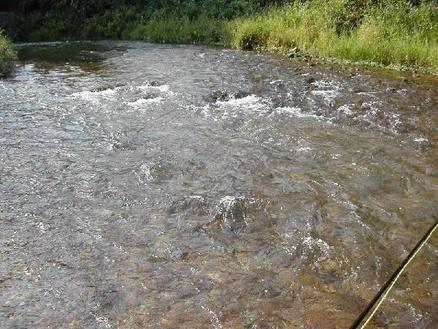 ​In order to be successful at catching trout, you need to understand how to find the fish once you arrive at the water. This is not terribly difficult, but it takes a little practice to get the hang of reading the water properly. You need to be able to identify basic stream anatomy and also structure that attracts trout. A river is very predictable in that it generally changes between a handful of different basic types of waters in pretty much the same pattern, over and over. That pattern is: riffles, pool, channel, run, tailout, repeat. Trout move into these different types of water for different reasons.

Riffles are often referred to as "rapids" or "ripples". This is simply a portion of the river where the incline is a bit steeper, the width of the river is a bit narrower, and the bottom of the river is a bit rockier. This produces a quicker flow with a choppy surface. Riffles should be important to you for a few different reasons. Trout generally feel safe in riffles, because of the broken surface of the water. I'm not implying that trout recognize that they cannot easily be seen, but the broken surface certainly decreases THEIR ability to see what's going on above the surface -- bird shadows, fishermen, etc. -- which is more likely the reason why they're less apt to spook. Also, when the trout are feeding competitively with each other, they'll move past each other up into riffles to pick at drifting nymphs and scuds. The fast current is not difficult for them to manage, because the friction of the water against the gravel provides a nice back current to help keep them in place. In addition, riffles with white caps are very highly oxygenated, meaning there's usually a stronger insect population present there. And since your fly is moving past the fish faster, and the choppy water makes it more difficult for the fish to clearly see the potential food, they have to make a quick decision. The faster current also makes it easier for the fisherman to see the strike. While fly fishermen generally nymph fish riffles, bait fishermen can have similar luck drift fishing salmon eggs or small worms under a bobber.​ 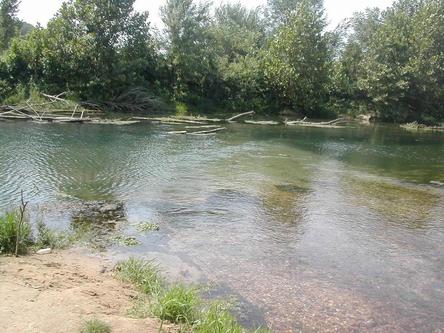 ​​Riffles eventually settle down and dump into a pool, which many fishermen refer to as "holes". The more impressive the riffles, the deeper the pool will be. This water is usually very well oxygenated by the riffles, and it provides cover from predators and shelter from excessive heat or cold. Pools generally have a strong population of minnows, darters, sculpins, crayfish, and other little things that swim away, making this area fertile hunting grounds for mature meat-eating trout. The deeper the pool, the more difficult it will be to fish under a bobber or strike indicator, but if you can get your bait or fly to the bottom, the trout are usually receptive. The pool can also provide some good results on a dry fly, as the insects that spend their aquatic lives in the rocks under riffles often lay their eggs as adults on the pools downstream. Sit-and-wait style bait fishermen generally prefer pools as well. Lastly, a pool is a good place to use flies and lures that represent swimming minnows -- i.e. spinners, crankbaits, jigs, streamers, etc. Pools can come in many shapes and sizes. The current can be painfully slow or fairly quick. The water depth can vary from only a couple feet to 15 feet or more. The pool may be round in shape, or it may continue downstream for some time.

Most pools will eventually lengthen into a channel. Channels can be tricky to read. If they run straight, the deeper water will be right down the middle. If they flow around a bend, the deeper water will be on the outside of that bend. Drop a few boulders in a channel here and there, and the current diverts. Drop a tree in the water, and who knows what you'll get. The only certainty is that trout don't generally live in a channel long-term, UNLESS there's some added structure to make it interesting. Channels often provide exciting top water action using dry flies and terrestrials, as well as drift fishing bait or sub surface flies.
​ 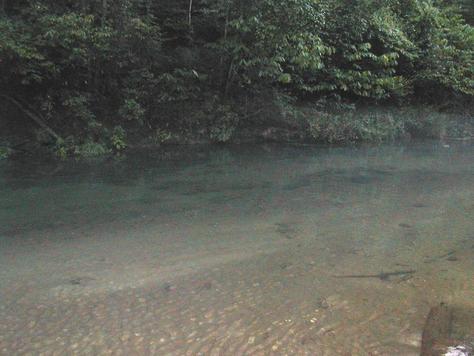 ​
​On larger faster rivers, a pool or channel may transition directly into another set of riffles. On most of our local rivers, though, the pool & channel will become a silty run, which is generally more shallow, wide and placid. Runs do not often hold feeding trout. This is due to a number of reasons. The most obvious reason is that most of the fish feel less secure in shallow placid water. So, the nervous trout will move to deeper water (a pool) or water with broken surface (riffles). Another reason you don't find many feeding trout in runs is because the food is limited. The sandy or silty bottom of a run will have some forms of burrowing aquatic insects, and they are occasionally available for trout feed on, but the bugs that trout are most familiar with tend to live in rocky environments. So, limited cover plus limited food equals limited fish. There are exceptions to the rule, however. If a run has some additional structure in the stream bed -- like a large boulder or a downed tree -- this adds to the cover and the trout's sense of security, and will likely hold a few fish. They still have the food issue to contend with, however. Silty and sandy areas are valuable in one other capacity, though. They are extremely important as resting areas for the most dominant trout in the river.

As a trout grows, he'll eventually reach a size where he cannot obtain enough calories by simply holding his position and waiting for food to drift to him. This means he'll have to either start scavenging like a catfish, OR he'll have to learn how to hunt. Trout that learn to hunt will move upstream into the pools, chase down a couple of minnows, a sculpin, maybe a sunfish, and then they'll settle back down into the silty areas to rest. Depending on the water temperature, they may only eat every few hours, but they can sometimes be harassed into biting a fly or lure that twitches right in front of them. So, don't just walk past those runs on your way to the next pool. Stroll slowly, and look closely.

As the run begins to quicken on it's transition to the next pool, you'll find what's come to be called a tailout, which is really nothing more than the flat water just above a riffle. It's an area where you may find fish in the warmer months trying to avoid backing into the riffles, and you may also find spawning pairs in this type of area in the spring or fall. It can be fun sight fishing these area, if you hit it right.
​As previously mentioned, various types of structure can attract trout for purposes of protection and food. These structures are usually in the form of a large rock or a downed tree. To best utilize these structures, you have to grasp how they change the river's current. Obstructions create bottleneck feeding lanes or "seams," funneling drifting food into a buffet line. The dominant trout in that area will obtain one of these primo feeding lanes by simply chasing away the smaller fish. The dominant trout will line up directly upstream or downstream of the obstruction, because food will be funneled to him at both locations. The downstream position is more protected, however, due to deeper water and a broken water surface. Trout holding in these types of bottleneck seams are generally feeding beneath the surface, so nymphs and baits drifted down to them generally work best. However, never rule out using a thickly tied dry fly in rougher water when nothing else seems to be working.
​