Definition of a fly
An artificial lure constructed on a single-point hook, using any material except "soft plastic bait" and "natural and scented bait" as defined in the wildlife code, that is tied, glued, or otherwise permanently attached. 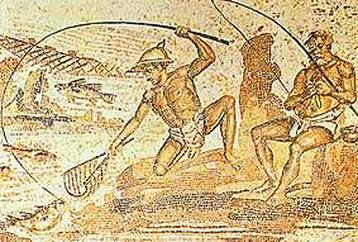 All fishing is enjoyable, but catching a trout on an artificial fly is one of the most rewarding and exciting experiences one can imagine. Those that appreciate fly fishing in its purest sense are the same sort of folks that prefer bowhunting to rifle hunting, backpacking to pay-site camping, and wilderness areas to state parks. This doesn't mean that a fly fisherman never rifle hunts, camps at a pay site, or visits a state park. It's just that their hearts usually lie elsewhere. If you are one of those people that enjoy the journey more than the destination, then you should give fly fishing a try.

For the fly fishing purist, the act is more of a religious experience than a hobby. And while we're fly fishing, there is a sense of following in some great historical person's footsteps, reliving someone else's notable experience, a feeling of being tied into something more significant than just trying to catch a fish. And these nondescript feelings are actually amplified when we fish in utter isolation. It's the sense that we're actually doing something truly breathtaking. However, if you define a successful day of fishing as a day when you can fill your freezer, then perhaps fly fishing is not for you. There's no right or wrong in it, it's just a matter of preference. Fly fishing is not for everyone.

Many people don't realize that fly fishing in some form has existed for thousands of years. An ancient Roman historian by the name of Claudius Aelianus, who made his reputation as a military writer (think "war correspondent" for the Roman army), documented fly fishing by the Macedonians more than 1800 years ago in the following manner:

"They do not use flies for bait, for if a man's hand touch them they lose their natural color, their wings wither, and they become unfit food for the fish. Instead, they fasten crimson wool around a hook and fix on to the wool two feathers that grow under a cock's wattles and which in color are like wax. Their rods are six feet long, and their line is the same length. Then they throw their snare, and the fish, attracted and maddened by the color, comes straight at it, thinking from the lovely sight to gain a dainty mouthful. However, when it opens its jaws, it is caught by the hook and enjoys a bitter repast as a captive."

Is that cool, or what? Of course, no can be certain, but it also appears as if they were actually trout fishermen. Claudius Aelianus described the fish as having a "spotted exterior", and he identified the river in question as the Astracus River, which holds brown trout to this day.

​This mosaic from the region is perhaps 1900 years old. Note the flimsy rods and landing nets. Look familiar? Could this be a picture of fly fishing Macedonians? 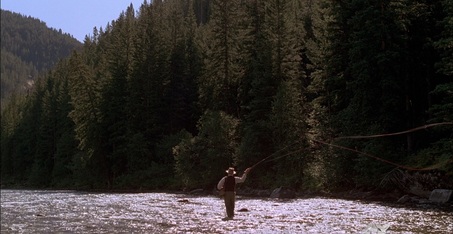 Fast forward 1890 years or so. Fly fishing is somewhat popular, but not yet considered terribly romantic. And then... THE MOVIE is released, and all hell breaks loose. Once the "girlfriends" started swooning over Norman and Paul Maclean and their Montana fly fishing adventures, the "boyfriends" started buying new equipment, running out to the rivers to slap the water with their El Cheapo brand plastic flyline. Of course, it didn't help that Brad Pitt was in the movie. For all we know, the real Norman and Paul could have been butt ugly, but noooo, they had to cast Craig Sheffer and Brad Pitt!

A River Runs Through It (the movie more so than the book), did a spectacular job of explaining the allure of fly fishing to those who knew nothing about it. Without clouding the action with words, the movie made it very clear what the fisherman was seeing, thinking and feeling, and the rationale behind the problem-solving and decision-making was all communicated by facial expressions and pause. It somehow managed to explain to many exactly why folks like us are obsessed. Many thousands of non-fishing spouses exclaimed, "Oh! Now I get it!" And to us obsessed fly-fishermen, this was a beautiful sound.

The movie really helped the sport. Our trout streams are now more likely than ever to be protected by our legislatures, because there are now many more voices screaming for just that very thing. And, it forces us old-timer fly fishermen to seek out more secluded, wild and challenging waters to avoid the crowds of newbies. And our wives now think we're just a little bit more like Brad and Craig. All in all, it's a win-win situation. Thank you Robert Redford.
Want to try your hand at fly fishing? Other than enrolling in one of my fly fishing classes or booking some private lessons, here's what you need to get started. Start with an inexpensive graphite fly rod and a simple fly reel. If you look around, you can probably find a painfully cheap fiberglass flyrod combo hanging on a peg in a big box store for less than $50, and that's not a bad idea if you're buying a rod just out of curiosity. If you are seriously interested, though, you should try something a bit higher in the quality department. Regardless of where you purchase your first outfit, expect most combos to have nylon backing and some ordinary fly line included -- the backing is tied to the reel, and the fly line is tied to the backing.

​​You'll also need to buy some leader material, which can actually be pretty confusing. Your fly line is big, bulky and easily seen by fish. The leader, which is simply specialized fishing line, attaches to the end of the fly line by way of a prefabricated loop, an inserted metal eyelet, or a simple nail knot (not that a nail knot is simple). Your leader should taper down in down size with the thickest portion (the butt end) attaching to the fly line and the thinnest portion attaching to the fly.

If you're fishing most Missouri waters, you can get by with a 7-1/2 foot tapered leader in size 4x. For more challenging waters or more difficult fish, you'll want to use a longer leader -- it's your first weapon against edgier fish. Onto the end of the leader, you'll attach an additional length of line in 5x using a triple surgeon's knot, a blood knot, or nested clinch knots. This additional line you add to your leader is called your "tippet."

The purpose of tapering your leader is three-fold. First, it allows for the fly to roll over properly when you cast. Second, it helps your fly tumble naturally in the current like a real bug. Third, if a fish (or tree) breaks your line, it will break at the weakest point, meaning it will break closer to your fly, thus saving most of your leader. The smaller the fly you're using, the smaller your tippet should be. A 5x tippet will work fine casting flies size 8 through 16, but with a 7x tippet, you can fish flies down to a size 24 or so. If you're fishing a fly smaller than a #24 in Missouri waters, you're just making your life too difficult.

This brings us to the fly, of course. There's a favorite debate that fly fishermen apparently enjoy. If you could only have "x" number of flies, what would you keep in your box? Well, if I didn't know where I was going to fish in Missouri, and I could only carry 10 fly patterns, here is what I'd take:
​If you're an avid fly-fisher, some of your favorite patterns are certainly not listed here, but a box stocked with this menu of flies will catch you fish on pretty much any Missouri trout stream.

Aside from these basic requirements, you'll, of course, need some additional equipment and accessories. You'll need a decent pair of waders, a vest, some fly boxes, some polarized sunglasses, and perhaps a landing net. Big box stores in trout country should have these items in stock, but if you seek out an actual fly shop, you'll get some extra perks for giving them your business. Aside from free tips and advice, many offer fly tying lessons and casting lessons free or cheap. Not to mention, they need your support! There's an old fly shop joke: If you want to be a millionaire fly shop owner, start with two million dollars.