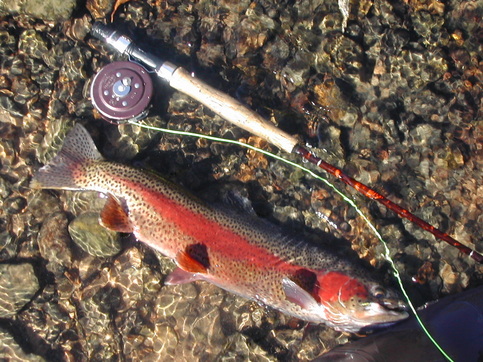 ​When people come to Branson, they almost always plan to see a show. Lake Taneycomo puts on a show, as well. It is Missouri's version of a "Football Freak Show" trout steam. Many premier trout fishing states have similar destinations that are well-known for producing big fat football-shaped fish, and Taneycomo can give them all a run for their money. Why is that? Because, the river is very similar to the other football rivers in two very important ways. First, it is a tailwater, meaning the source comes from the bottom of a deep lake through the turbines of a dam. Second, it has incredible scud and sowbug populations as the trout's primary food supply.

Those of you who have fished the Frying Pan River in Colorado, one of the more famous football trout streams in the country, may not have noticed that it is also a tailwater fishery with an impressive scud population. Those two ingredients are a simple but rare recipe for giant fish -- stable temperatures and a stable food supply.

In case you were confused by our reference to Lake Taneycomo as a river, you heard correct. It is a river, as far as fishermen are concerned. It's technically a lake, because there is the powersite dam almost 23 miles downstream. That makes it an impoundment, if you adhere to the strictest of definitions. However, the waters of Lake Taneycomo flow freely past the powersite dam, which allows the lake to have a notable current at all times.

There are two types of trout water present on Lake Taneycomo, but neither of them fall into the new Red, White & Blue Ribbon categories established by the MDC in 2006. So, perhaps we should continue calling it by it's old designation of Special Trout Management Area. At any rate, the upper three miles of Taneycomo are ideal for wading fishermen. The regulations there are strict and somewhat complicated, but the outcomes are worth it. The remaining 20ish miles of the river are more suited to those fishing from a boat, from the bank, or from one of the many commercial trout docks along the shore. The regulations loosen along this stretch. 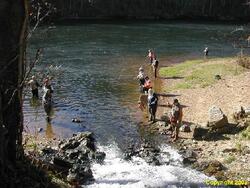 Zone #1
From the closed zone 760 feet below Table Rock Dam to the mouth of Fall Creek, and the tributaries entering Lake Taneycomo within that area, artificial flies and lures only (soft plastics specifically prohibited). Fishermen may keep 4 trout daily, of which only 1 may be a brown trout. Rainbow trout must be less than 12" or greater than 20" to harvest. Brown trout must be greater than 20" to harvest.

This area of the river is growing in popularity every year with the potential for catching truly huge trout luring more and more fishermen to the Branson area. If you're already in Branson, then just grab one of the mass-produced maps available on every hotel counter top to find your way to the Shepherd of the Hills Fish Hatchery. Of course, try to take back roads and alternate routes as much as you can, otherwise you could take all day getting there in the bumper-to-bumper traffic. If you're coming to Branson just to fish, the easiest way to get to the water is to bypass Branson altogether. From highway 65, South of Branson, take highway 165 West. That will take you straight to and over Table Rock Dam. You can turn right just before the dam to find river access, or you can cross the dam and turn right to get to the hatchery area.

Once you get to the water, you'll find the upper three miles of the river are easily accessible to wading fishermen. Don't get sucked into fishing the first 1/4-mile exclusively. While the fishing there is great, you'll also be in the most crowded area. By investing some time in working your way downstream, you'll find some great spots and more elbowroom.

Once you wade into the water, you'll probably find yourself surrounded by fish. Getting them to the net is a different story, however. You'll generally find a lot of fly fishermen here, but one thing you'll notice is that 10% of the fly fishermen are catching 90% of the fish. The reason for this disparity is that this is not a trout park. These fish are not stocked nightly -- rainbows are stocked monthly, and browns are stocked just once per year -- so you will be casting to resident fish that have mostly learned to survive by eating natural food in a highly pressured environment. In other words, you'll have to be on top of your game.

Some popular fly patterns include small scud and sowbug patterns (of course) in size 14 & smaller. Copper-bodied flies also tend to work well, if you go small enough, i.e. brassies, copper johns, and ultra-wire midge nymphs. Soft-hackle wets are also productive in sizes 16 and down. Partridge and orange is a good example, but bring a variety of colors. Occasionally glo-bugs and work well, and some fly fishermen swear by san juan worms, chamois worms, and yarn worms (like the newish "mega worm"). If the fish are feeding on the surface, try dark-colored midge dries and emergers, and teeny tiny Adams and Blue-wing Olives (#20 & smaller).

October is when the lunker hunters begin visiting Taneycomo. As the days grow shorter, the browns begin moving upstream to spawn. The biggest browns of the year are generally caught during the October and early November pre-spawn period by fishermen using big flies and lures. Various styles of big streamers in a variety of colors are productive -- black and yellows, white with glitter bodies, black or olive Woolly Buggers, etc. Spin fishermen can have good luck with the old standbys -- in-line spinners and crankbaits -- but don't overlook little spoons. Sometimes, they knock 'em dead. For a change, try night fishing, as mature brownies are very successful nighttime hunters. Many night fishermen will use glow-in-dark strike indicators with the normal daytime wet patterns, but if you're adventurous, try using big black flies and lures with meaty bodies, and keep them closer to the surface than you would normally during the day. This will present a great silhouette for the fish to see against the night sky, and the hits can be absolutely jarring.

Here's a tip we received from Todd DeCarlis regarding an experience he had in October 2004.

My brother and I had mostly been fishing the nights after work for a couple of hours til just after dark last October. The first few tries, we used some soft hackles, some tiny dries, and even some leech patterns but had sparing success. It finally hit us as we noticed ourselves swatting away countless mosquitos and midges. The subtle sips on top of the water left little doubt what they were hitting. So, before our next trip we tied like crazy as many midges as we could in several colors and patterns, all about 18-20 in size. To make a long story short, my brother and I, at least that night, were the two guys on the river catching all the fish...we could hear the whispers over the water, “what are they using?” We caught 29 fish between us, 17 of which were brown, and even better, 14 of them were 22 inches or better. All in two hours before sunset, and on flies no bigger than size 18. All this to say, adding to what you already said, that even when fishing for the lunkers during the spawn, don’t forget to pack a few midge patterns. I will be there this next October with a box full of em.

Todd went on to clarify that they were using midge pupa patterns just underneath the surface, spitting on the flies to keep them in the surface film, and giving them a slight twitch when landing them on the surface to get them under.

If you're wading, be mindful of rising water. Once or twice each day, Table Rock Dam opens the gates in order to generate electricity from the increased flow. They will blow a siren a few minutes before opening a gate. If they blow more than one siren, they are opening more than one gate. As soon as you hear the first siren, head to the shore immediately. Staying for that one last cast could put you in very real danger.

Those that just can't bring themselves to leave when the water is up tend to crowd around the feeder streams coming from the hatchery outlets. Yes, you can catch fish, but does this really look like fun to you? Leave and go see the sights for a few hours and come back later. You were probably ready for a break, anyhow!
​Zone #2
From the mouth of Fall Creek to Powersite Dam, including all tributaries entering Lake Taneycomo within the zone, the daily limit is 4 trout, only one of which may be a brown trout. Brown trout must be greater than 20" to harvest. No bait restrictions, and no size restrictions on rainbow trout.

There are amazing fish populations in the parts of Taneycomo downstream from Fall Creek. However, wading fishermen and bank fishermen are largely out of luck. To reach the vast majority of the best water, you simply need a boat. If you don't own a boat, there are several dock operators who will gladly rent you a boat, and there are a few highly regarded guides who will take you fishing for a fee. It may seem like a lot of money for a day of fishing, but these guys routinely get their clients into 30 fish a day with lunkers not uncommon. Be sure to book ahead, because they are busy.

Lower Taneycomo can be confusing to traditional trout fishermen, because the water seems to have less character and structure. This is true, in one sense, because the water is deeper and smoother without riffles, pockets, or obvious seams. However, there is plenty of submerged structure that concentrates the fish in certain areas. Yes, downed trees count, but we're really talking about changes in the channel, shoals, holes, eddies, etc.

If you have experience tracking bass in lakes on submerged cover, then you'll probably do fine. However, you cannot roll your boat over the top of the cover to read it on your depth-finder, otherwise you'll just spook off the fish. You either need to have some skills at guessing what the bottom looks like based on what the bank looks like, or you need to have enough experience on the lake to know where you're going. This is why a guide comes in so handy for newcomers. You might consider it an investment in your future fishing. Next time, you'll only have to pay for a boat rental!

The most productive fishermen, however, tend to drift their boats, allowing their baits to drift along with them. These drift-fishermen may be using wet flies or nymphs, marabou jigs, or natural or prepared bait. It doesn't really seem to matter. The trick is to find the right depth at which to drift the bait so the fish have to actually move out of the way to avoid eating it. Then, drift it past as many fish as possible. This method routinely works well throughout the trout management area -- depending, of course, on the concentration of fish present. When they're generating and the water is up, drift fishermen will commonly boat all the way up through the trophy area, which is usually far too shallow otherwise.

In 1992, a 64-year old man named Howard Collins caught the world record brown trout (at the time), which weighed 40 pounds 4 ounces. It was taken from the Little Red River in Arkansas, another outstanding Ozarks tailwater fishery. Mr. Collins was using an ultra-light spinning rod, 4-pound test line, and a little olive marabou jig. He hooked the fish on his third cast, and he landed it in five minutes. The current record is 42 pounds 1 ounce (New Zealand).  Taneycomo has the stock to beat that record. Go get 'em!
​