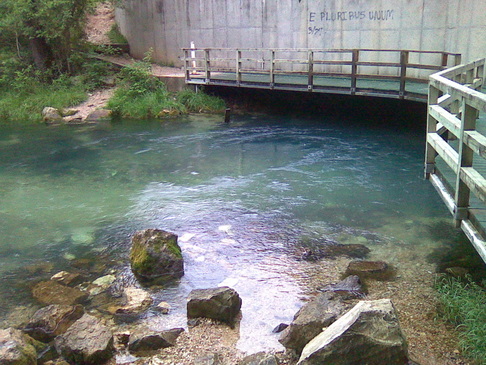 Roubidoux Spring is the primary cold-water source for this fine trout stream, which flows right through downtown Waynesville, and the spring is quite the attraction for a couple of reasons. In the summer time, it's a popular swimming hole. Also, the waters flow out of an impressive submerged cave system, which is considered among the best diving caves in the country. The concrete wall constructed above the spring to keep the road in place definitely detracts from the natural beauty, but try to overlook that.

The spring branch joins the Roubidoux just upstream of downtown Waynesville and flows north 3-1/3 miles to the Gasconade river. The first mile or so is White Ribbon water, but the lower stretch is Red Ribbon managed primarily for larger brown trout. While the fishing is good in both areas, there are a few challenges to its becoming a true high-class fishery.

The White Ribbon Water is a bit less than 1 mile stretching from the spring, through downtown Waynesville, past the city park, down to the utility cables that cross the river. The largest portion of the creek upstream from the downtown bridge is deep and wide with very little structure. Fishing success here is mostly tied to the stocking truck, with the majority of trout being taken on bait and in-line spinners. Just above the bridge, the creek begins to pick up more character with a few series of riffles and pools extending to below the city park. This area can be very productive for fly fishermen and drift fishermen when the water's up a bit, but it's still more of a spinner creek.

The Missouri Department of Conservation has a big challenge, if they want to develop this portion of the river into a year-round fishery. With the creek running right through downtown, the stocking truck simply cannot visit without the locals being aware of it. Those who fish the area can help the cause by practicing catch and release. Fish who have been eating trout chow for a year don't really taste that great anyway, do they?

One thing is for certain. The MDC is not giving up on this area. This 1-mile section of the Roubidoux Creek receives more trout stocked than all other White Ribbon areas in the state with the only exceptions being the white ribbon areas of the Current River (7-1/2 miles long) and the Eleven Point River (14 miles long). 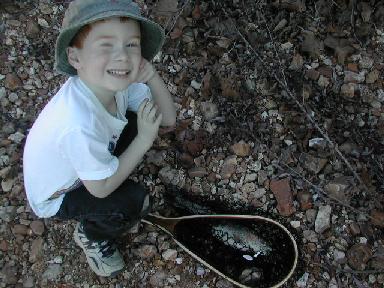 The Red Ribbon Area starts at the utility line crossing the creek just down from the city park and extends all the way to the Gasconade River. This portion of the creek is lovely and has good structure and a lot of character, and there are many spots that hold trout year 'round. However, the plan for this portion of the river to begin to provide increasing numbers of trophy-sized trout has a number of barriers to its success.

There are no notable additional springs along the length of the creek, so the water warms significantly along the way. Water temperatures in a trout's comfort zone allow it to migrate upstream, while water that is too cold or too warm push them downstream. For brown trout fishing, this means that the red ribbon section will really only have actively feeding browns present during the spring and the fall. In the coldest part of the winter and the hottest part of the summer, the fish are lethargic and largely dormant. And since there is no rainbow trout stocking in the red ribbon section, and since the rainbows in the white ribbon section are generally harvested as soon as they're stocked, there are relatively very few rainbows found further downstream to round out the fishing experience.

Another barrier is that the MDC stocks this area more lightly than the other Red and Blue Ribbon areas in the state. The other areas typically receive annual stockings of between 700 and 1000 trout per mile per year. In the past, the Roubidoux Creek Red Ribbon Area has typically receives closer to 360 trout per mile. It's unclear if this difference is due to less fishing pressure than other rivers, problems with aquatic food sources, water temperatures, or other habitat issues. What does appear clear, though, is that the MDC hasn't given up on the creek. It simply appears they're trying to figure out what to do with it. They've tried stocking the browns twice a year instead of just once, but it's not clear if that's helped the fishery or not.

While their numbers are smaller, rainbows can be found downstream from mid-summer until mid-winter, and fly fishermen can have decent success with traditional Western fly fishing tactics. At other times of the year, the rainbows are generally closer to the headwaters. Browns are the opposite. You can find them upstream during autumn and early winter months and scattered throughout the river the remainder of the year. The mature browns usually prefer larger prey and can be more vulnerable to bigger flies, streamers, spinners & crankbaits. As an additional perk, you also have an excellent chance at catching quality smallmouth bass, as well as trout. The further downstream you go, in fact, the more warm water species you will encounter. ​

The Roubidoux Creek runs right through downtown Waynesville, which is located on I-44 between St. Louis and Springfield.